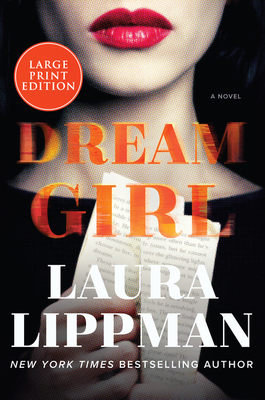 "With this tip of the hat to Stephen King's Misery, Dream Girl is funny and suspenseful, with a dread-worthy final twist." —People

“My dream novel. I devoured this in three days. The sharpest, clearest-eyed take on our #MeToo reckoning yet. Plus: enthralling." —Megan Abbott, Edgar Award-winning author of Dare Me and The Fever

Following up on her acclaimed and wildly successful New York Times bestseller Lady in the Lake, Laura Lippman returns with a dark, complex tale of psychological suspense with echoes of Misery involving a novelist, incapacitated by injury, who is plagued by mysterious phone calls.

In the end, has anyone really led a blameless life?

Injured in a freak fall, novelist Gerry Andersen is confined to a hospital bed in his glamorous high-rise apartment, dependent on two women he barely knows: his incurious young assistant, and a dull, slow-witted night nurse.

Then late one night, the phone rings. The caller claims to be the “real” Aubrey, the alluring title character from his most successful novel, Dream Girl. But there is no real Aubrey. She’s a figment born of a writer’s imagination, despite what many believe or claim to know. Could the cryptic caller be one of his three ex-wives playing a vindictive trick after all these years? Or is she Margot, an ex-girlfriend who keeps trying to insinuate her way back into Gerry’s life?

And why does no one believe that the call even happened?

Isolated from the world, drowsy from medication, Gerry slips between reality and a dreamlike state in which he is haunted by his own past: his faithless father, his devoted mother; the women who loved him, the women he loved.

And now here is Aubrey, threatening to visit him, suggesting that she is owed something. Is the threat real or is it a sign of dementia? Which scenario would he prefer? Gerry has never been so alone, so confused – and so terrified.

Chilling and compulsively readable, touching on timely issues that include power, agency, appropriation, and creation, Dream Girl is a superb blend of psychological suspense and horror that reveals the mind and soul of a writer.

Since Laura Lippman's debut in 1997, she has been recognized as a distinctive voice in mystery fiction and named one of the "essential" crime writers of the last 100 years. Her books have won most of the major awards in her field and been translated into more than twenty languages. She lives in Baltimore and New Orleans with her daughter.

"With this tip of the hat to Stephen King's Misery, Dream Girl is funny and suspenseful, with a dread-worthy final twist."
— People

“My dream novel. I devoured this in three days. The sharpest, clearest-eyed take on our #MeToo reckoning yet. Plus: enthralling."
— Megan Abbott, Edgar Award-winning author of Dare Me and The Fever

"Lippman never stops twisting the plot into a deliciously intricate pretzel, right up to the jaw-dropping finale. This is both a beguiling look at the mysteries of authorship and a powerful #MeToo novel, but that's only the tip of a devilishly jagged iceberg..."
— Booklist (starred review)

"Lippman (Lady in the Lake) nods at Stephen King and Alfred Hitchcock in this hair-raising tale, but makes it wholly hers and completely riveting. She conveys the horror of being housebound and reliant on strangers, as well as the fear of losing one’s mind. It’s a page-turning, plot-twisting masterpiece."
— Library Journal (starred review)

“The closest writer America has to Ruth Rendell.... What makes this book special, even extraordinary, is that the crossword puzzle aspect is secondary...[Lady in the Lake] reflects the gulf which then existed between what women were expected to be and what they aspired to be.”
— Stephen King, New York Times Book Review, on The Lady in the Lake

“A cavalcade of narrators—including Cleo’s ghost, who wants Maddie to stop poking into her world—and Lippman’s expert storytelling bring the city’s tensions wondrously to life.”
— People on The Lady in the Lake

“Inspired by the unsolved death of Shirley Parker... Lippman’s ambitious novel weaves some twenty points of view into a seamless, vivid whole. The novel demonstrates that Lippman, a former Baltimore Sun reporter, is both a skilled journalist and a masterful novelist.”
— Washington Post on The Lady in the Lake