Now Eat This!: 150 of America's Favorite Comfort Foods, All Under 350 Calories: A Cookbook (Paperback) 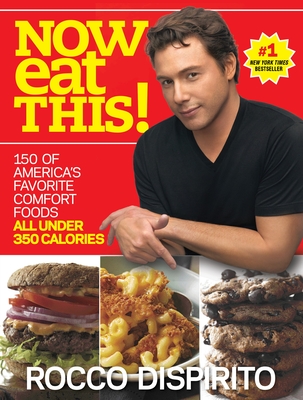 By Rocco DiSpirito
Email or call for price
Backordered

At the age of sixteen celebrated chef Rocco DiSpirito entered the Culinary Institute of America, and at eighteen began working for legendary chefs worldwide. After graduating from Boston University with a degree in business, he began working for such renowned New York chefs as Gray Kunz. In 1995 Rocco opened Dava and quickly earned two stars from Ruth Reichl at The New York Times. At thirty-one, Rocco opened Union Pacific in New York City and received three stars from The New York Times.

Hailed as one of Food and Wine magazine’s Best New Chefs, DiSpirito is the first chef to grace the cover of Gourmet magazine as “America’s Most Exciting Young Chef,” and was voted their “Leading Chef of his Generation.” Referred to as America’s original “Rockstar Chef,” Rocco has been featured in Harper’s Bazaar, Cosmopolitan, W, The New York Times, Details, House Beautiful, Us, OK! and People, including the Sexiest Man Alive issue.

DiSpirito also starred in the Food Network series Melting Pot, the NBC hit reality series The Restaurant, and the A&E series Rocco Gets Real. He is a content partner on Rachael Ray, and a frequent guest on Good Morning America and Top Chef. He has appeared on The Oprah Winfrey Show, The Ellen DeGeneres Show, Chelsea Lately, The Late Show with David Letterman, The Tonight Show with Jay Leno, Jimmy Kimmel Live, and NBC’s The Biggest Loser, and was the first chef to compete on the ABC megahit Dancing with the Stars.

In 2006 DiSpirito began his quest toward a more active and healthy life, competing in triathlons, including an Ironman 70.3. In November 2009 he was the spokesperson for and completed the Ironman in Clearwater, Florida, setting a personal-best time. Rocco lives in New York City and appreciates all that cooking has brought to him.