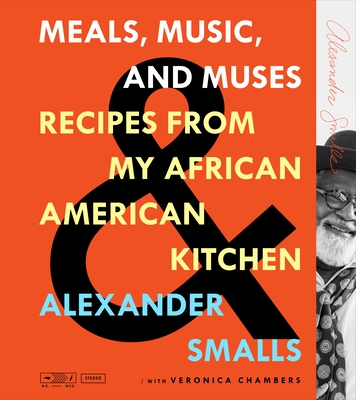 Iconic chef and world-renowned opera singer Alexander Smalls marries two of his greatest passions—food and music—in Meals, Music, and Muses. More than just a cookbook, Smalls takes readers on a delicious journey through the South to examine the food that has shaped the region. Each chapter is named for a type of music to help readers understand the spirit that animates these recipes.

Complete with anecdotes of Smalls’s childhood in the Low Country and examinations of Southern musical tradition, Meals, Music, and Muses is a heritage cookbook in the tradition of Edna Lewis’s A Taste of Country Cooking.

Alexander Smalls is a restaurateur and co-owner of the celebrated Harlem jazz club Minton’s. As the former chef/owner of Café Beulah, Sweet Ophelia's, Shoebox Cafe, and The Cecil, Smalls has received great acclaim in the restaurant scene—including cooking at the James Beard House and being named one of Zagat’s 19 NYC Restaurant Power Players. His memoir and cookbook, Grace the Table, features recipes from his upbringing of Southern Revival cuisine. Smalls is also a world-renowned opera singer and the winner of both a Grammy and a Tony Award. He lives in Harlem, New York.

VERONICA CHAMBERS is the editor of the New York Times archival storytelling team, a new initiative devoted to publishing articles based on photographs recently rediscovered as the paper digitizes millions of images. She is the editor of The Meaning of Michelle, celebrating the former first lady, which was a Los Angeles Times bestseller and a Time Magazine Top Nonfiction of the year. Veronica has written several books as well, including Mama’s Girl, a critically acclaimed memoir, and she co-wrote Yes, Chef with Marcus Samuelsson and 32 Yolks with Eric Ripert.

Named one of the Best Books of 2020 by Esquire

Named one of the 11 New Cookbooks Worth Buying, Even in Quarantine by the New York Times

Named one of Publishers Weekly's Best Lifestyle Books of 2020

“This eclectic cookbook provides classic Southern recipes with extra flair thanks to Smalls’s affinity for music. An internationally recognized opera singer, he elevates the work by naming each chapter after a type of music and diving into the details of his South Carolina childhood and how it influenced his cooking style.” - Publishers Weekly

"Chef Alexander Smalls began his life in the South Carolina low country, but has traveled the world as a world class opera singer, opened some of Americas finest restaurants, and has the awards to prove it. His new cookbook, Meals, Music, and Muses: Recipes from My African American Kitchen bridges his two passions and presents them as binding forces of culture and history." - Deep South Dining

"Alexander Smalls might be the only person who’s won a Grammy, a Tony, and a James Beard Award. His most recent book, Meals, Music, and Muses: Recipes from My African American Kitchen, bridges his celebrated careers as both an opera singer and a restaurateur while telling the story of Southern food through music. It’s a rich and layered read, with each chapter paying tribute to a genre of music and a genre of food that, as Smalls writes in the book’s introduction, ‘are rooted in a knotty lineage that connects West Africa and Western Europe.’" - Taste

“Alexander Smalls has owned, conceptualized, and helmed some of New York’s most iconic African American restaurants. Now, he follows up the James Beard award-winning Between Harlem and Heaven with Meals, Music, and Muses, a look at his world glimpsed through the lenses of music, food, culture, and history. It is a must-read journey through a life well lived and in recipe and reminiscence details the musical forms learned, the friends and family who instructed, and the foods shared along the way.” - Jessica B. Harris

“If wine is bottled poetry, and jazz is brown sugar sprinkled in your ear, then Meals, Music, and Muses is a smorgasbord of fine words and sounds, a delicious symphony of haute cuisine that’ll make you wanna kiss your momma, then thank the ancestors for making a way out of no way—for Hoppin’ John Cakes and Grits and Sage Sausage Gravy and Frogmore Stew and all the recipes Alexander Smalls has reimagined so elegantly.” - Kwame Alexander

“I had the great honor of being a guest at one of Alexander’s famous Sunday brunches in his beautiful brownstone in Harlem. The food was unbelievably delicious! It was a magical afternoon that I will never forget.” - Tina Knowles-Lawson

“In Meals, Music, and Muses, Alexander creates a lyrical culinary anthology of our lives. A symphonic composition full of stories, contemporary southern recipes that celebrates the food and musical genres that influenced the history of America… He sets the table in a unique way from jazz to blues to divas on a plate…This is not your mother’s cookbook…" - Dee Dee Bridgewater